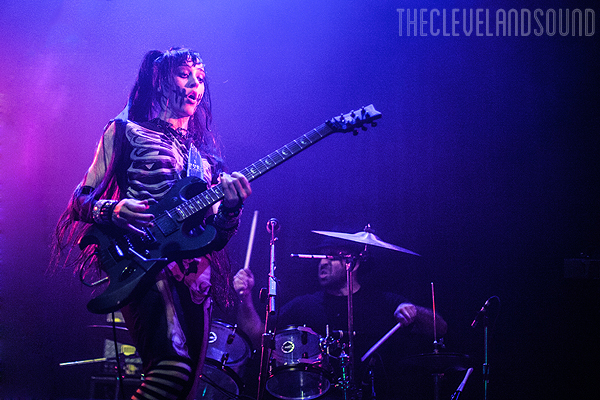 This article originally posted to theclevelandsound.com on November 3rd, 2013.

One-Eyed Doll are the definition of a Do-It-Yourself act. From album releases to interviews to their tremendously loyal fanbase, the duo of Kimberly Freeman and Jason “Junior” Rufuss Sewell have a very particular vision of how they want their art to be presented. This isn’t to say that they are control freaks; rather, their oversight of every aspect of the group stems from a sense of freedom, to create what and how they please, without the white noise of a music business which regardless of one’s view is fundamentally abusiness.  As former industry insider Sewell says, “We just do whatever we want. We’re not trying to find that magical marketing thing that everyone’s into.” The Cleveland Sound was fortunate enough to sit down with the group for a video interview as they provided direct tour support for the 20th anniversary of Mushroomhead’s legendary Halloween show in Cleveland. True to the group’s quirky aesthetic, turkey hats and stuffed animals were the uniform du jour.